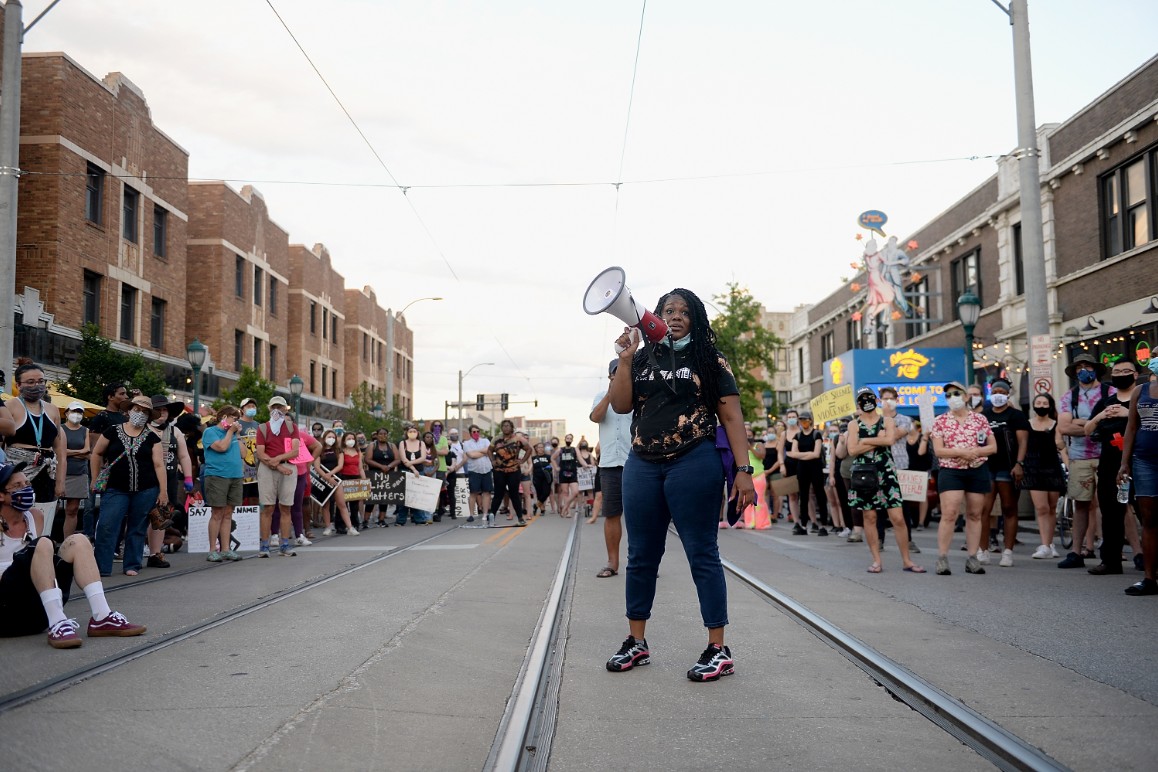 But Bush and her allies say Clay is an absent politician. Progressives have leveled a litany of accusations against the congressman: that he sided against then-President Barack Obama’s attempt to shield retirement savings from greedy Wall Street financiers, that he is beholden to corporate PACs, and that he hasn’t been a forceful enough advocate for working families.

Bush, her endorsers say, is uniquely suited for the moment.

“Cori has lived through the reality of being a Black woman in this country,” said Jamaal Bowman, the middle-school principal who beat Engel, the House Foreign Affairs chair, in June.

Justice Democrats is also in Bush’s corner for round two.

“With the Black Lives Matter movement sweeping the entire nation, it would be fitting for one of the main leaders of the Ferguson movement to be elected to Congress,” Justice Democrats executive director Alex Rojas said in a statement. “There’s a new generation of leaders shaped by this movement who want to bring the urgency on the streets into elected office.”

Despite the liberal group’s involvement, Ocasio-Cortez herself has not backed Bush this time. Last cycle, Ocasio-Cortez campaigned alongside Bush in St. Louis in the weeks after she ousted then-Rep. Joe Crowley. This time, she’s noticeably absent, a likely sign of the uncomfortable politics around challenging an incumbent. (Ocasio-Cortez and Clay serve on a committee together.)

Meanwhile, Clay is taking the challenge seriously. He’s dropped negative mailers and one heated attack ad that said Bush profits off politics like President Donald Trump and that she claims to be “the pastor of a church that doesn’t exist.”

Clay’s campaign declined to make him available for an interview. But in a statement to POLITICO, he cast the election as “a simple choice” between his opponent’s “empty rhetoric” and his “real results.”

“She claims to be a Democratic Socialist,” he wrote in the statement. “But when it comes to pocketing campaign contributions, she’s a crony capitalist to the max. A real progressive wouldn’t take campaign money and put it in her own pocket.”

Clay touted his endorsements from Democratic groups, including Planned Parenthood, the Congressional Progressive Caucus and the CBC. And he knocked Bush for paying herself more than $22,000 from her campaign accounts in the second quarter. (Bush has said she needed to draw a salary to support her and her family after pausing her nursing job to become a full-time candidate).

To win, Bush will need high support among young people and white voters. She also needs to peel off some of Clay’s support in the Black community, particularly in St. Louis County, outside the city limits.

She attributes her loss two years ago in part to a car accident that sidelined her in a key stretch of the election. This time she comes armed with higher name ID from both her 2018 run and her appearance in the popular Netflix documentary “Bringing Down the House,” which also featured Ocasio-Cortez.

“When I’m knocking, people are saying, “Oh, hey, I saw you on Netflix! You’re in that documentary,’” she said.

But the element of surprise that helped Ocasio-Cortez in 2018 is not something Bush can use to her advantage this year.

The CBC readied its defenses immediately following the midterms. They’ve framed progressive challengers as outsiders coming into a district to target longstanding members that have spent years ingrained in the community. Clay also has the backing of the Democratic Congressional Campaign Committee, which rolled out a new policy at the beginning of the cycle to inhibit primary challenges against incumbents.

“His constituents are not looking for an unknown, inexperienced person who touts left-leaning talking points as their representative. I think they want someone who can bring some stability,” said Rep. Anthony Brown (D-Md.), a CBC member. “I think a lot of people are anticipating a Biden administration, where relationships matter.”

The CBC’s loyalty to incumbents extends beyond their own members. The caucus backed Engel over Bowman, though Bowman is Black. Bowman said in an interview that he wished he would have been considered for an endorsement, but that he did not take it personally.

Bowman — one of three minority candidates to knock off a white Democratic incumbent in a city district over the past two years — described the growing primary challenges within the party as an “ideological one” rather than a “generational battle in Congress.”

Bush views CBC’s support for incumbents differently, challenging the caucus to research the candidates before blindly endorsing. Black Caucus leaders need to more closely scrutinize their incumbents’ records “to see what this person has actually done for their district,” Bush said.

“I don’t care that somebody’s name was on a membership of something,” she said. “That does not entitle them to hold the seat.”