California surpasses 600,000 coronavirus cases, most in US: Live


Here are the latest updates:

India’s confirmed coronavirus cases have crossed 2.5 million with another biggest single-day spike of 65,002 in the past 24 hours.

India is behind the United States and Brazil in the number of cases.

The Health Ministry on Saturday also reported another 996 deaths for a total of 49,036. 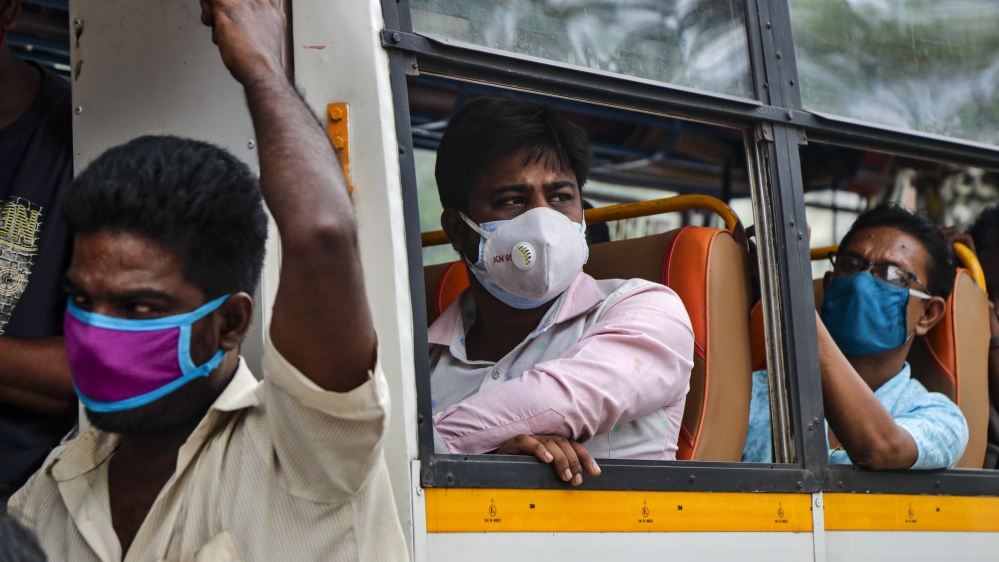 India’s two-month lockdown imposed nationwide in late March kept infections low. But it has eased and is now largely being enforced in high-risk areas [Bikas Das/AP]

The average daily reported cases jumped from around 15,000 in the first week of July to more than 50,000 at the beginning of August.

The Health Ministry said the rise shows the extent of testing with 800,000 carried out in a single day. But experts say India needs to pursue testing more vigorously.

New Zealand reported seven new cases of COVID-19 as a lockdown in the country’s biggest city, Auckland, was extended in response to the Pacific nation’s first coronavirus outbreak in months.

Six of the seven new cases have been linked to the cluster responsible for all the previous community cases, while one case was being investigated, Director-General of Health Ashley Bloomfield told a media briefing in Wellington.

The new cases bring New Zealand’s total infections since the start of the year to 1258, while the number of currently active cases stands at 56. Twenty-two people have died so far.

Coronavirus cases in Latin America has exceeded 6 million and is continuing to accelerate, according to a Reuters tally, as most of its nations begin to relax lockdown measures.

The region reached 6,000,005 confirmed cases by Friday evening and 237,360 deaths. That accounts for just under one-third of the world’s total case load and a similar share of reported deaths from the pandemic.

The climb from 5 million to 6 million cases took 11 days, one day less than it took to reach the previous million.

Latin America is the region of the world worst-affected by the pandemic, reporting an average of more than 86,000 daily infections and more than 2,600 deaths in the last seven days.

Health authorities in China reported 22 new coronavirus cases in the mainland for August 14, compared to 30 cases a day earlier.

Of the new infections, 14 were imported and the locally transmitted cases included seven in the far western region of Xinjiang and one in Guangdong province.

On Friday, a shopping centre in Shenzhen, a city in Guangdong, was sealed after a COVID-19 case was confirmed there. The Shenzhen health authority later that day said two positive cases had been found, both of whom had worked inside the mall at the Alibaba-owned supermarket Freshippo.

Freshippo said in a separate statement that it had suspended operations at 21 of its stores in Shenzhen to carry out disinfection work and nucleic acid tests for its employees. 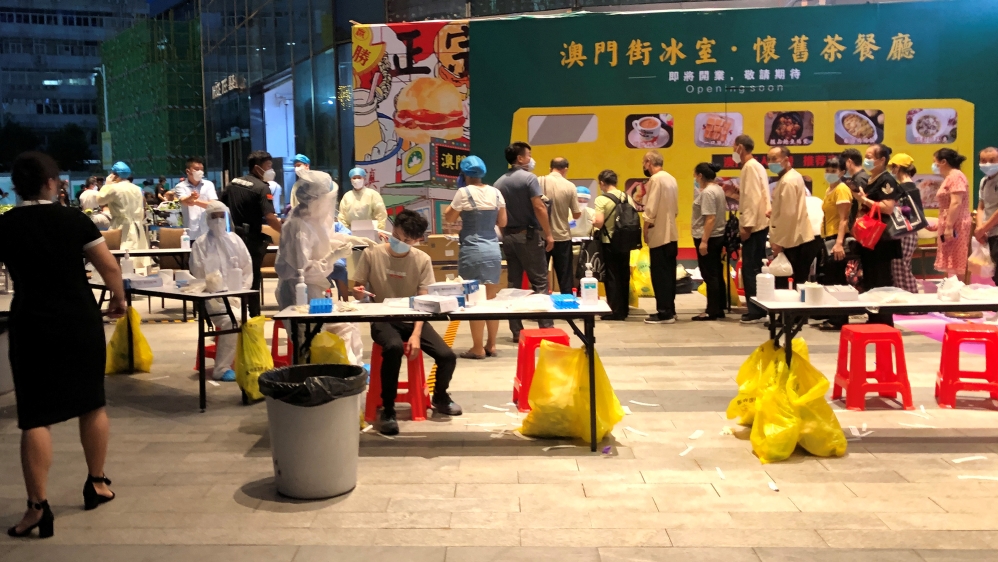 The Australian state of Victoria continued to flatten the curve in its wave of COVID-19 infections and deaths, reporting four more fatalities and 303 new cases in the past 24 hours.

It was the second-lowest daily figure in Victoria this month after 278 cases on Thursday.

Victoria’s daily numbers are gradually decreasing, with the seven-day average down to 344 from 521 a week ago. But authorities warn more progress is needed before lockdown restrictions in the city of Melbourne can be eased.

South Korea reported 166 newly confirmed case of the coronavirus, it’s highest daily jump in five months, amid fears transmissions were getting out of control in the greater capital area.

The figures announced by South Korea’s Centers for Disease Control and Prevention (KCDC) brought the national caseload to 15,039, including 305 deaths.

The KCDC said 155 of the new infections were locally transmitted, mostly from the densely populated Seoul metropolitan area where authorities scurried to shut down thousands of churches, which have emerged as a major source of COVID-19 cases. Many of them had failed to properly enforce preventive measures, allowing worshippers to take off their masks, sing in choirs or eat together in diners.

Other clusters have been tied to nursing homes, schools, restaurants, outdoor markets and door-to-door salespeople.

Hugo Lopez-Gatell, Mexico’s point man for the coronavirus pandemic, said he thinks the country reached its peak of infections over the last three weeks.

“We have now had a maximum point in the curve,” the assistant health secretary said, while also predicting that second waves of infections would continue occurring around the world for some time.

“This is a phenomenon that is going to be with us in the whole world for several years,” he said.

Lopez-Gatell had had previously wrongly predicted that infections would peak in May and June.

Meanwhile, the number of confirmed coronavirus cases in Mexico rose by 5,618 on Friday to reach 511,369. The health department reported 615 newly confirmed deaths from COVID-19, bringing the country’s total deaths to 55,908.

France’s capital, Paris, is expanding the areas of the city where pedestrians will be obliged to wear masks starting on Saturday morning.

The Champs-Elysees Avenue and the area around the Louvre Museum are among zones where masks will be mandatory, and police checks ensuring respect for mask-wearing in designated areas are to be reinforced.

Bars and restaurants could be ordered closed if distancing and other barriers to virus transmission are not respected, health officials said.

California became the first state in the United States to surpass 600,000 cases of COVID-19 on Friday, although Governor Gavin Newsom said he was encouraged to see that hospitalisations have declined 20 percent over the past two weeks and admissions to ICU wards were down 14 percent in the same period.

“The number that really matters to us is that positivity rate,” he said when asked about the state’s caseload. The positivity rate – the number of confirmed infections as a percentage of tests done – has declined from 7 percent to 6 percent statewide over the past 14 days, Newsom said.

“I’m not going to back off on more tests because I fear [more cases],” he said. 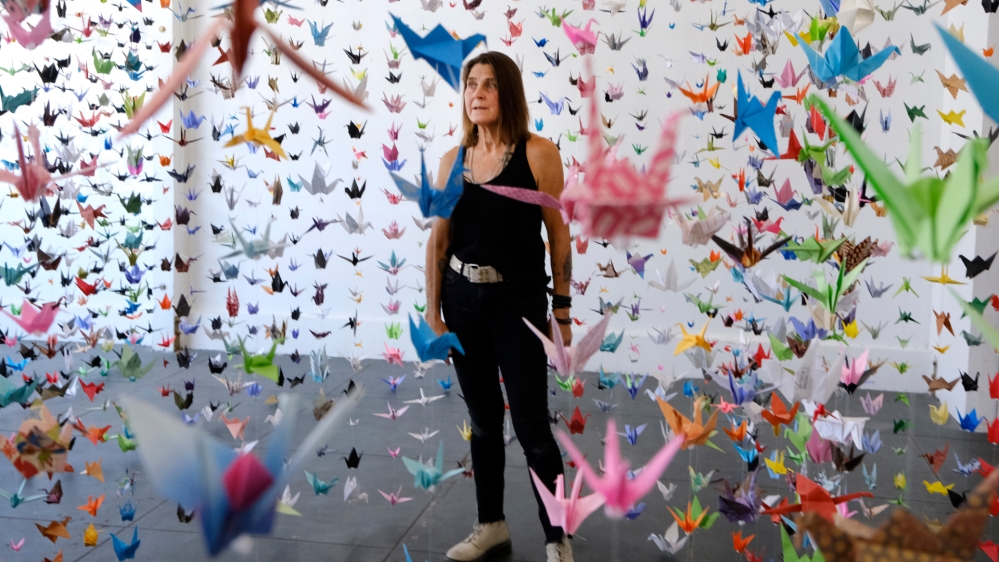 Karla Funderburk, artist and owner of Matter Studio Gallery, stands among some of the thousands of origami cranes hanging during an exhibit honouring the victims of COVID-19 in Los Angeles, the US on Tuesday, August 11, 2020 [Richard Vogel/ AP]

For all the key developments from yesterday, August 14, go here.

‘Watching my world collapse’: The plight of Nigeria’s widows