Senior Democrats have called the US postmaster general to testify before Congress on “dangerous” operational changes to the post office they say jeopardise November’s elections, and are planning emergency funding legislation.

In a joint statement on Sunday, they said a warning by the United States Postal Service that mail-in ballots may not arrive in time to be counted on November 3 was a threat to the integrity of the elections “and to our very democracy”.

Ms Pelosi intends to call the House back early from the August recess and invite Mr DeJoy and Robert Duncan, chairman of the USPS board of governors, to testify at an urgent hearing on August 24. At issue are changes lawmakers claim could slow the mail and threaten mass postal voting during the coronavirus pandemic.

“The president has explicitly stated his intention to manipulate the Postal Service to deny eligible voters access to the ballot in pursuit of his own re-election,” Democratic lawmakers said in a statement on Sunday.

Adam Schiff, top Democrat on the House intelligence committee, and senator Bernie Sanders were among lawmakers who called for Mr DeJoy to resign over the weekend.

He [Mr DeJoy] needs money to operate if you’re going to hit him with millions of ballots . . . . [he wants] to make the post office great again

Mr Trump claimed on Saturday that mass postal voting could make it impossible to know the results of November’s presidential election “for months or for years” as he stepped up his campaign against universal mail-in voting. He said the process would be “catastrophic”.

Mr Trump, who is facing defeat at the election according to the latest polls, warned votes could be lost, discarded, or subject to fraud — found “in piles” or “be gone” — adding there would be no way to know when to cut off the vote count.

Mr Schumer said on Sunday that Mr DeJoy had refused three times to meet him. He added that he wanted to bring “must-pass” legislation to force the hand of the post office. “Mr DeJoy has a public-be-damned attitude,” he said.

Mr Schumer said he would also demand the Senate be recalled for hearings and a vote. It was not clear if Senate majority leader Mitch McConnell would accept such a request.

Mr DeJoy has been criticised for dismantling mail sorting machines, cutting overtime and removing post boxes since starting as postmaster-general in June. The post office says structural changes and budget cuts are needed to put it on an operational footing as dwindling revenues tumble further during the pandemic.

Mr Meadows called on Democrats to negotiate funding for the USPS, which is facing budget shortfalls. He said the president would sign on to additional funding as part of a wider stimulus package that has become stalled along party political lines. “I’m certain . . . that whether it’s $10 billion or $25 billion or something in between, we can do that,” he said. 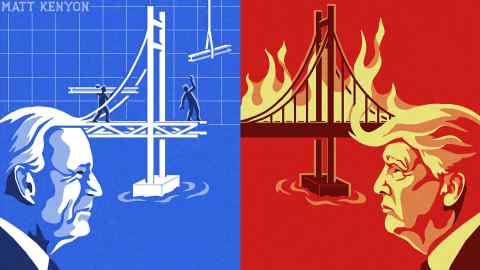 Crowds of protesters demonstrated outside Mr DeJoy’s home in Washington on successive days over the weekend, accusing him of gutting the service to hinder postal voting. Some posted fake mail-in ballots through the grate on his front door.

Mr Trump has defended Mr DeJoy, arguing he was trying to “streamline the process” and blaming Democrats for failing to agree the terms of a stimulus package which he claimed could fund the post office.

“He needs money to operate if you’re going to hit him with millions of ballots,” he said, adding Mr DeJoy wanted “to make the post office great again”.

“If they [Democrats] can’t get the money they need for universal mail-in voting, I don’t see how they can have it,” said Mr Trump, adding the main problem with mail-in voting was that “you’re never gonna know when the election’s over”.

Democrats in Congress have pushed to include $25bn in emergency funding for the postal service in stimulus legislation, warning that coronavirus will make postal voting more important at this election than ever.

All flights at Istanbul Airport canceled amid heavy snowfall

Vatican says McCarrick’s rise fault of many, but spares Francis