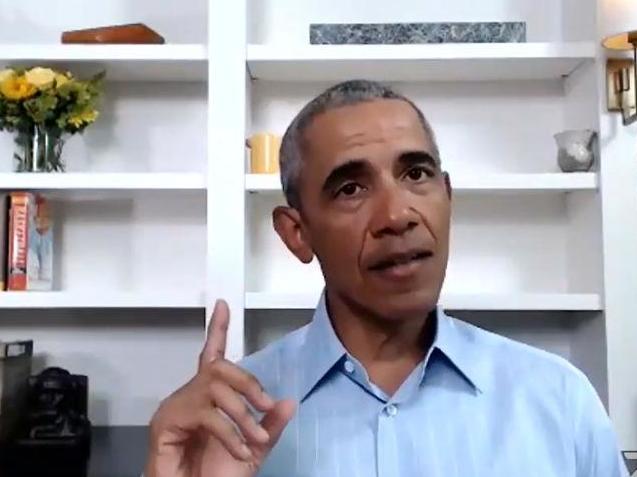 Barack Obama has voiced his support for sports teams that boycotted games on Wednesday in protest at the police shooting of Jacob Blake, saying that it will take “all our institutions” to affect change.

The former president, who has increasingly called for greater race equality and police reform following the killing of unarmed black man George Floyd in July, thanked players for standing up for what they believe in.

“I commend the players on the Bucks for standing up for what they believe in,” Mr Obama, 59, wrote in an early morning tweet on Thursday. “It’s going to take all our institutions to stand up for our values.”

Mr Obama’s comments came after the National Basketball Association (NBA) postponed all three playoff games on Wednesday, after the Milwaukee Bucks boycotted Game 5 of their series against the Orlando Magic to protest racial injustice, triggering similar moves across other sports.

The action by the Wisconsin-based Bucks side follows the police shooting of Jacob Blake, a black man, in the city of Kenosha, also in Wisconsin, on Sunday.

The Bucks players said in a statement they were unable to focus on basketball due to the events in Kenosha.

The shooting of Jacob Blake has sparked three nights of civil unrest that has included a wave of arson, widespread vandalism and a separate shooting that claimed two lives in Kenosha, a city of about 100,000 residents on Lake Michigan, 40 miles (60 km) south of Milwaukee.

Mr Blake was shot seven times and has been left paralysed, his parents said.

“I just killed somebody,” the 17-year-old is reported to have said, after allegedly shooting one of his victims in the head, and another in the chest, shortly before midnight on Tuesday evening.

Witnesses at the scene said Rittenhouse walked past police armed with the weapon that he allegedly to carry out the shootings – despite crowds calling for his arrest.

Rittenhouse, according to his social media accounts, has an admiration for guns and the police; he also appears to be a Donald Trump supporter.

Rittenhouse has been assigned a public defender ahead of his next court appearance. He is being held at Lake County juvenile detention facility pending a hearing on his potential extradition to Wisconsin, according to the sheriff’s office.

‘No punches pulled’: US condemns China’s HK move ahead of talks

While Facebook works to create an oversight board, industry experts formed their own