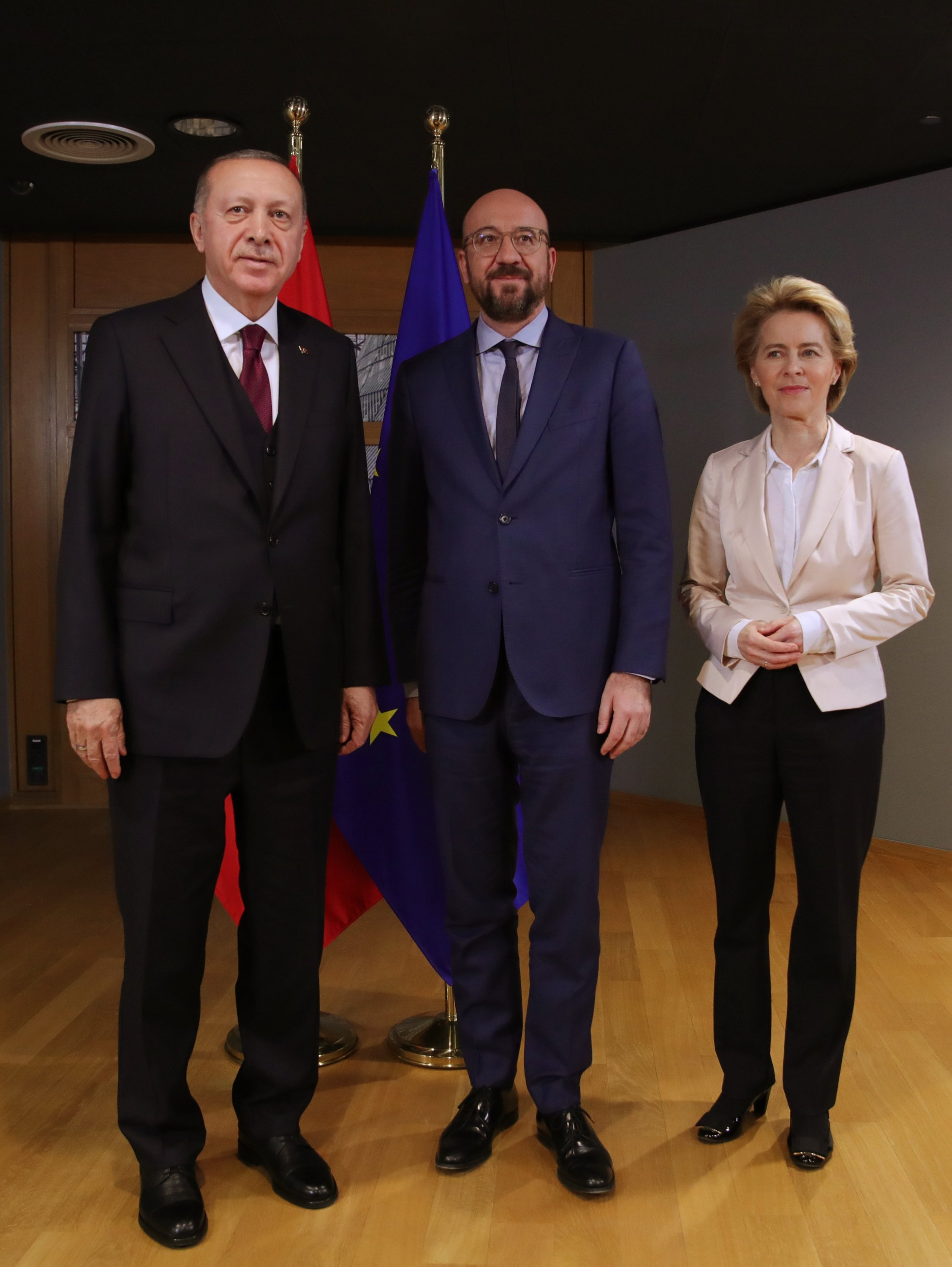 President Recep Tayyip Erdoğan on Wednesday held a video meeting with President of the European Commission Ursula von der Leyen. The two leaders discussed the issues related to the disputes in the Eastern Mediterranean ahead of a European Union meeting.

In the meeting, Erdoğan pointed out that at the heart of the Eastern Mediterranean tensions lies Greece’s and the Greek Cypriot administration’s maximalist claims and the fact that the rights of Turkey and the Turkish Cypriots are ignored.

Erdoğan conveyed to von der Leyen that Turkey, who has been supporting dialogue since the beginning, is ready for exploratory talks with Greece and said he hoped the chance for diplomacy would not be wasted by Greece once again.

The president pointed out that the renewal of the March 18 agreement between Turkey and the EU, the updating of the customs union and visa exemption would prove a solid basis for relations to enhance.

Reiterating that a just share of the burden is needed regarding the migration issue, Erdoğan said that the EU needed to investigate the violations carried out by Greece and the European Border and Coast Guard Agency (FRONTEX).

They also discussed bilateral relations between the EU and Turkey and regional issues.

An EU summit on Thursday and Friday has been postponed due to European Council President Charles Michel being quarantined after a security officer tested positive for the coronavirus, his spokesperson announced on Tuesday. The meeting between the 27 EU leaders will take place on Oct. 1-2 instead.

The deferred gathering of EU leaders in Brussels is set to focus on relations with Turkey, which have deteriorated in recent months due to a dispute with Greece about gas exploration activities in the Eastern Mediterranean.

Erdoğan is also expected to hold a phone call with NATO chief Jens Stoltenberg later in the day.

Turkey and Greece have made good progress in technical talks on the Eastern Mediterranean, Stoltenberg said earlier in the day.

Greece, with France’s support, has disputed Turkey’s energy exploration, trying to box in Turkish maritime territory based on small islands near the Turkish coast.

Turkey, the country with the longest coastline on the Mediterranean, has sent drillships with a military escort to explore for energy on its continental shelf, saying that Turkey and the Turkish Republic of Northern Cyprus (TRNC) have rights to resources in the region.

To reduce tensions, Turkey has called for dialogue to ensure fair sharing of the region’s resources.

Palestine’s contaminated vegetables: From farm to table, without regulation

Wolves, Everton and Leicester £23m target wants out this summer