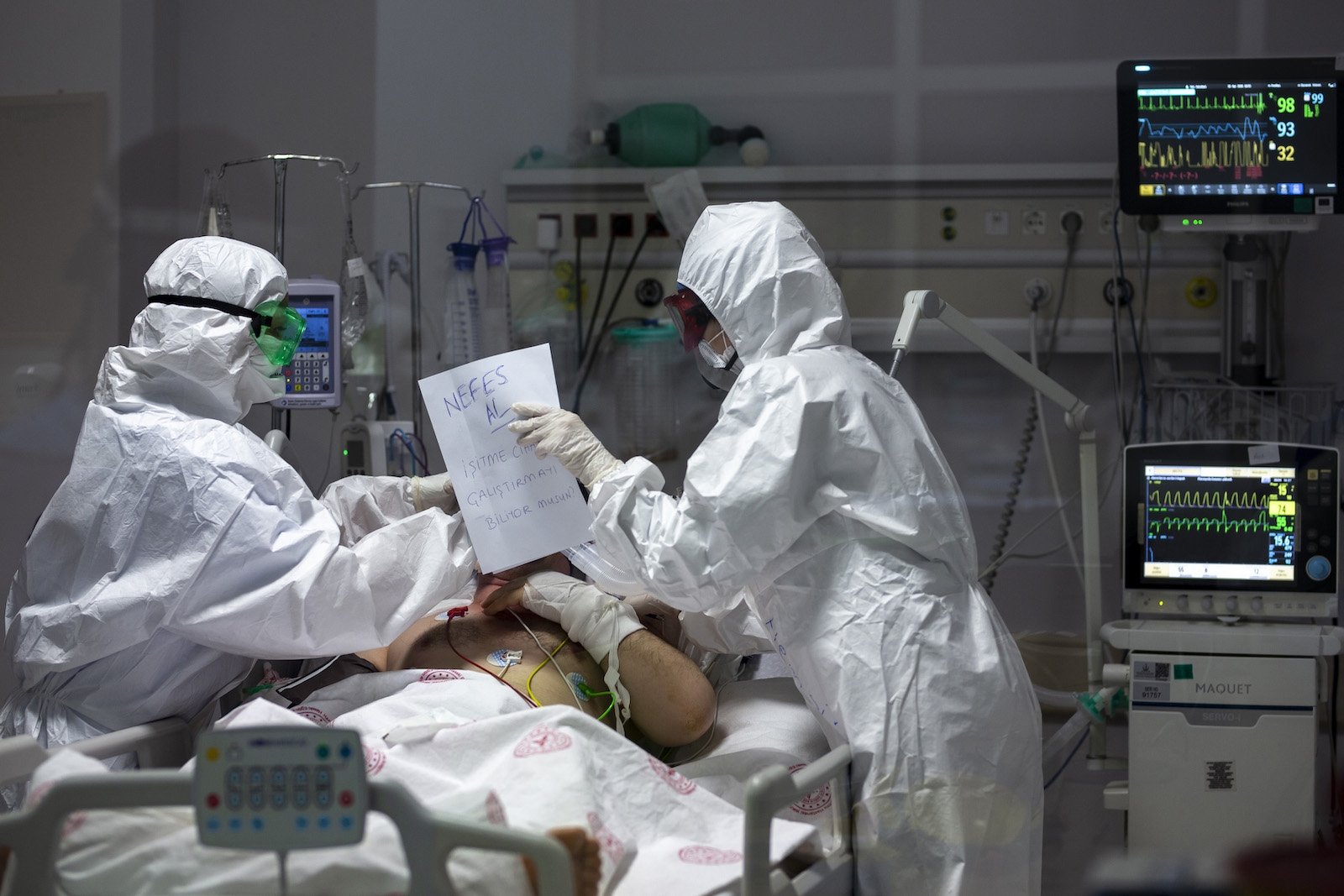 On the front line of a unique war against an invisible enemy, health care workers face several challenges these days. Whether working at a hospital in the city, at a small clinic in a remote town, in an ambulance or out in the field tracking down patients, they wrapped up a chaotic year marked by the COVID-19 outbreak.

Working daylong shifts, covered head-to-toe in uncomfortable protective suits, health care workers have been forced to spend their free time away from their families due to the infection risk. Despite taking all protective measures, the industry was hit by a wave of infections and fatalities. Today, one in every 10 coronavirus patients is a health care worker, according to statistics. As of the last week of December, at least 216 health care workers, from doctors to technicians, had died of the disease. Overall, some 120,000 health care workers were infected.

Just like soldiers give their lives defending their country against terrorists, health care workers are the martyrs of modern times. The public already knows of some outstanding doctors who succumbed to the coronavirus, but many more nameless heroes are leaving a legacy of devotion to public health behind. And just like soldiers who return to the front line after recovering from their injuries, almost all health care workers have returned to duty after recovery. Some were infected twice, and some have lingering health problems in the wake of the devastating disease, but this does not daunt them.

The government recently enacted a regulation giving benefits to victims and the families of deceased personnel by recognizing COVID-19 as an occupational disease for health care workers. The names of these heroes also adorn hospital walls. Yet, nothing can bring back deceased medical professionals who contributed so much to public health. For the survivors, the chances of coronavirus reinfection are high, and they will be the first ones to get vaccinated against the coronavirus. Amid the struggle, they ask the public for only one thing: to comply with the rules, such as wearing protective masks, adhering to social distancing and practicing good hygiene, so that their workload of infected patients reduces and they can return to their pre-pandemic routines.

Dilek Tahtalı, who worked as a registration clerk at a private hospital in Istanbul, was the first hospital staff to die of the coronavirus which made its foray into Turkey in March. Tahtalı, 33, died March 26 and was the youngest victim of the virus in the country at that time. Tahtalı was infected after she met a relative of a COVID-19 patient for accounting procedures at the hospital. She had a preexisting chronic illness, and her health worsened when she contracted the infection for a second time at another hospital she was taken to, from another patient.

Five days after Tahtalı’s death, professor Cemil Taşçıoğlu, 68, became the first high-profile name from the Turkish medical world to succumb to the virus. He was a professor of internal medicine at Istanbul University and was a beloved academic who trained thousands of medical students. He was also the doctor who diagnosed the country’s first COVID-19 patient. Taşçıoğlu died about two weeks after being admitted to the hospital of the university where he taught. A renovated hospital in Istanbul’s Okmeydanı neighborhood which was reopened to help the fight against the coronavirus was named after him.

Like Taşçıoğlu, professor Feriha Öz was a beloved member of the medical community and a lecturer to countless doctors. Öz, who died one day after Taşçıoğlu, was 87 years old when she succumbed to the coronavirus. A pathology expert at the prestigious Cerrahpaşa Faculty of Medicine in Istanbul, Öz had retired in 2000. Her name was given to an emergency hospital opened on Istanbul’s Asian side, which focuses on the treatment of coronavirus patients.

Murat Dilmener, who died on May 3, shares the posthumous honor of having a hospital named after him. The professor was 78 years old when he died in Istanbul, where he had worked for decades at the Cerrahpaşa Faculty of Medicine. Dilmener was an infectious diseases expert, but for his patients, he was better known as the man who would provide free treatment to patients who did not have insurance, even if it meant breaking the rules. His private clinic was the go-to destination for poor patients, who were treated and examined for free. His family says Dilmener was likely infected while treating another patient he “could not turn away.” Though he retired from hospital work in 2008, he continued to treat patients at his clinic.

Ahmet Cevdet Çitoğlu was another early victim of the outbreak. The 67-year-old ophthalmologist who had retired from the profession had sought to volunteer to help coronavirus victims by applying to the Presidency’s communications center just one week before he was infected. Çitoğlu supported many social causes and was the founder of a search and rescue association set up to help migrants.

Health care workers continue the fight despite losses and repeatedly plead for the public to be more careful. Pelin Korkmaz is one of them. Korkmaz, who works at the Kırklareli Training and Research Hospital in the eponymous northwestern province, survived the disease, but her only worry was having to leave her job for a while. “The most difficult thing before I was infected was to be careful not to infect anyone from my family. I was in quarantine at home but could not come close to them. I survived but I have some colleagues who lost their loved ones because they infected them,” she told Anadolu Agency (AA).

Korkmaz said recovery is never certain for COVID-19 patients but health care workers have exerted tremendous efforts since March to help them. “We witnessed a lot in this process. We saw how people you could describe as strong were scared and crying. This is a fight against an enemy we don’t see. There are treatments but none of them are certain to save a patient,” she said.

Korkmaz said health care workers heed the rules against the virus the most, yet their efforts alone are not enough. “Every member of society should do what is necessary and ease the burden on us. I am really astounded to still see people not following the rules. I should admit that we, as doctors, are not as ‘brave’ as those walking on the street without masks,” she said.

Gürsel Bedir, head of the Directorate of Health in the eastern province of Erzurum, is another health care worker who was infected with COVID-19 despite all the measures he took. Bedir’s work involved regular visits to hospitals and close contact with patients and their relatives. Twenty days after getting infected, he recovered and was back on duty. “You don’t know how you will get infected. There is no guarantee that there won’t be a positive case in any environment you are in,” he said. “Everyone working in clinics and hospitals is sacrificing their time and health, from doctors and nurses to security guards and cleaners.”

Mustafa Yakarışık and Ali Türedi, two internal medicine specialists, were the first medical professionals in the northern province of Giresun to be infected with the coronavirus. Both doctors work at the Professor A. Ilhan Özdemir Training and Research Hospital, and both recovered and returned to work. Yakarışık battled COVID-19 for one month and calls on the public to be vigilant against the outbreak. “Certainly, elderly people are affected more but I had patients who died at a young age. No one should be confident of surviving it, whether they are old or young. I came across people who thought they would never be infected because they protected themselves, but in the end, their tests turned out positive,” he said. Yakarışık said his days have been busy since the pandemic started and he is tired but is grateful to see a drop in the number of patients.

Ali Türedi recovered after a treatment process marked by joint pain and headaches. “Our workload has doubled because we treat both COVID-19 patients and patients suffering from other diseases. People can help us by complying with rules against the pandemic,” he said.

Makbule Karagöz, a nurse of 27 years working at the cardiology department of Karaman Training and Research Hospital in the central province of Karaman, was infected and treated at the same hospital where she worked. “I was very careful and repeatedly warned people I know to be careful but I was infected anyway. My first test came back negative but then severe headaches kicked in. I don’t have any chronic diseases, and never smoked or took painkillers in my life. Yet, I was infected. My colleagues ran a diagnostic scan on my lungs and found the virus had reached there. I was scared. They gave me oxygen and I felt better but I was breathless soon. I was feeling unwell and remember begging doctors to save me. I was then taken to the intensive care unit and started thinking about death,” she said. Karagöz then underwent complementary plasma therapy and her health started improving. Days after she was hospitalized, she started recovering and is now at her mother’s house in self-isolation, away from her husband and son.

“Everyone at the hospital is working tirelessly, from doctors to security guards. They sacrificed themselves. I remember seeing them sweating heavily in the protective suits. People think it is our natural duty but they don’t know what they go through. These people have been away from their families for months, cannot hug their children. But people out there still ignore the rules, not wearing masks and continuing to create crowds,” Karagöz said.

Israel’s new PM vows to toughen up approaches against Hamas

Ripple Assails the SEC, Claims the $1.3 billion Lawsuit is an 'Attack on the Entire Crypto Industry Here in the United States' | Altcoins Bitcoin News