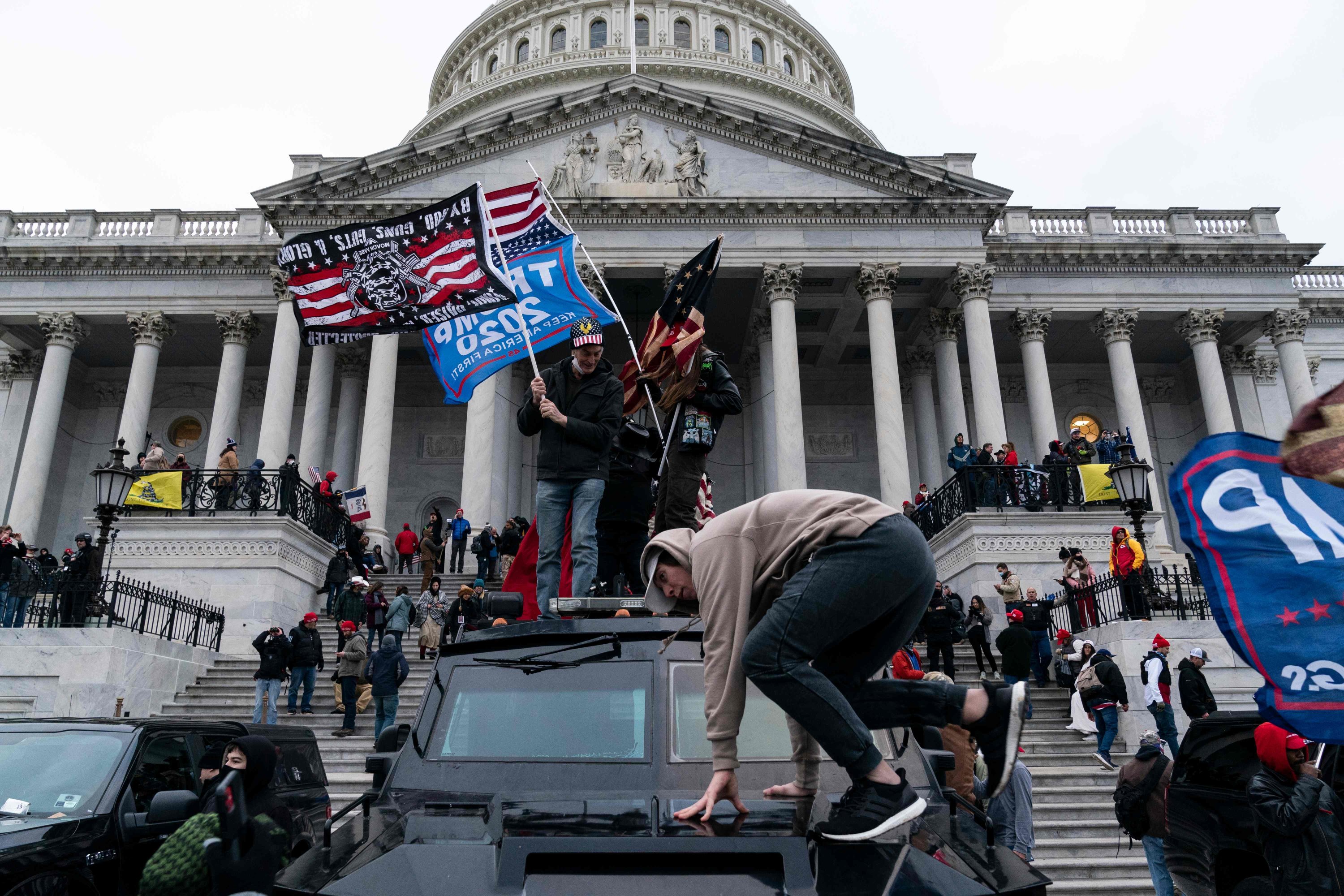 In a text message, a radicalized Trump supporter suggested getting a boat to ferry “heavy weapons” across the Potomac River into the waiting arms of their members in time for Jan. 6, court papers say. It wasn’t just idle talk, authorities say.

Investigators found invoices for more than $750 worth of live ammunition and for a firearm designed to look like a cellphone at the Virginia home of Thomas Caldwell, who’s charged with conspiring with members of the far-right Oath Keepers militia group in one of the most sinister plots in the U.S. Capitol siege. Right-wing extremists, blessed by then-President Donald Trump, were unleashed last month, and their menacing presence has reignited the debate over domestic extremism and how law enforcement should be handling these groups.

In nearly half of the more than 200 federal cases stemming from the attack on the Capitol, authorities have cited evidence that an insurrectionist appeared to be inspired by conspiracy theories or extremist ideologies, according to The Associated Press (AP) review of court records.

The FBI has linked at least 40 defendants to extremist groups or movements, including at least 16 members or associates of the neo-fascist Proud Boys and at least five connected to the anti-government Oath Keepers. FBI agents also explicitly tied at least 10 defendants to QAnon, a pro-Trump conspiracy theory that has grown beyond its fringe origins to penetrate mainstream Republican politics.

In at least 59 other cases, authorities have linked defendants to violent or extremist rhetoric, conspiracy theories or other far-right connections on social media and other forums before, during or after the Jan. 6 siege, a deeper review by the AP found. The AP’s review found that in many of those cases the defendants repeated false claims, made by Trump for months of his presidency, that the U.S. election was rigged.

Some broadcast death threats targeting Democrats on their social media accounts or in messages. Others were deeply entwined in a world of far-right conspiracy theories about the COVID-19 pandemic. And dozens of the alleged rioters echoed words used by QAnon supporters, who push a baseless belief that Trump is a secret warrior fighting to expose a cabal of Satan-worshipping bureaucrats and celebrities who traffic children.

According to a New York Times report, a group of people who had provided security for Trump’s longtime friend and ally, Roger Stone, also took a part in the Jan. 6 attack. Although Stone denied any involvement in the Capitol siege, calling the riots “the lawless acts at the Capitol,” the Times investigated hundreds of videos and pictures to track Stone’s security team and its movements on Jan. 5 and Jan. 6. The report showed that at least six of the “guards” were associated with Oath Keepers and all of them have been seen on the footage from the inside the Capitol building during the siege.

On Saturday, the Senate acquitted Trump in his second impeachment trial. A leading liberal advocacy group is urging its supporters to call on attorney general nominee Merrick Garland to “investigate and prosecute Trump and his entire criminal network for law breaking.”

The U.S. attorney’s office in Washington has assigned a special task force of prosecutors examining whether to bring sedition charges against some of the rioters, as prosecutors and federal agents across the country develop more cases against extremists who plotted to attack the Capitol. Prosecutors have another task force examining attacks targeting journalists. President Joe Biden, in office not yet a month, has already ordered law enforcement and intelligence officials to investigate domestic terrorism. But increased enforcement is not so simple. Much of the inflammatory rhetoric is protected by the First Amendment.

And some civil rights groups have expressed hesitation over any expansion by law enforcement because black and Latino communities have born the brunt of security scrutiny and they fear new tools to target extremism will end up tracking them. Meanwhile, conspiracy theories proliferate.

Conservative social media app Parler doubled its userbase, adding 8.7 million users, after the election when Facebook and Twitter cracked down on accounts spreading misinformation about the election. Calls on the conservative platform for users to revolt or launch a war over the election results also grew, according to the AP’s analysis of an archived Parler dataset of 183 million posts and 13 million user profiles.

The archive, which was attained between August 2018 and Jan. 10, when Parler was taken offline, was provided in advance of publication to the AP by researcher Max Aliapoulios at New York University. Parler posts containing the word “revolution” grew by five times as much as the overall rate of message traffic after the election, the analysis found. About 84% of posts referring to the hashtag ”#1776″ occurred on or after Election Day, according to AP’s analysis.

Post-election references to “treason” and the QAnon slogan “trust the plan” both increased by about 10 times the overall rate, the data showed. From Jan. 6 through Jan. 8 the terms “civil war,” “trust the plan” and “hold the line” were mentioned more than 250,000 times across online media, including Twitter, Redditt and Instagram, according to an analysis by media intelligence firm Zignal Labs.

As well, Trump supporters who flooded the Capitol were quick to co-opt lingo from the American Revolution and the nation’s founding documents to paint themselves as patriots instead of extremists. In the federal cases, the FBI quotes at least 11 defendants referring to “we the people,” at least 10 referring to “1776,” at least nine using “revolution” and at least eight using some variation of “traitor” or “treason.”

Tube to get full mobile network by end of 2024, says London mayor

Tube to get full mobile network by end of 2024, says London mayor

‘On the edge’: Are New Zealand’s tough immigration rules harming the economy?

Mothers’ names to be included on marriage certificate for first time

From struggling in the 2nd division with HAL to winning I-League with Aizawl – How Eze Kingsley turned his fortunes!