EU turns to US in scramble for Oxford/AstraZeneca vaccine


The EU will urge the US to permit the export of millions of doses of AstraZeneca’s Covid-19 vaccine to Europe, as Brussels scrambles to bridge supply shortfalls that have hobbled its inoculation drive.

The European Commission plans to raise the matter in forthcoming transatlantic discussions aimed at boosting collaboration on the fight against Covid-19, EU officials said.

The EU also wants Washington to ensure the free flow of shipments of crucial vaccine ingredients needed in European production, including for groundbreaking mRNA technology vaccines.

The European push to access US production of the AstraZeneca jab — The vaccine, which was made in collaboration with Oxford university — comes as the company battles to meet first-quarter 2021 EU delivery targets already slashed because of production problems in the bloc.

AstraZeneca has also said it intends to source half of its planned second-quarter supply to the EU from elsewhere in the world.

The European Commission told the Financial Times: “We trust that we can work together with the US to ensure that vaccines produced or bottled in the US for the fulfilment of vaccine producers’ contractual obligations with the EU will be fully honoured.”

The EU move comes after it emerged this week that Italy and the commission had blocked a shipment of AstraZeneca jabs to Australia. That stoked global tensions and fears of vaccine hoarding.

The EU is urgently trying to boost a vaccine rollout that has trailed those in both the US and the UK.

Joe Biden, US president, and Ursula von der Leyen, European Commission president, discussed pandemic co-operation on Friday. The US and EU are both big vaccine producers and have a “strong interest” in working together for the good functioning of world supply chains, the commission said after the call.

Thierry Breton, EU internal market commissioner, has now been tasked to work with Jeffrey Zients, US co-ordinator of the Covid-19 response, on vaccine supply chain matters. EU officials are hopeful that the more co-operative transatlantic relationship seen since Biden took office will help smooth the effort.

AstraZeneca insists that it remains on track to hit its target to deliver 40m doses to the EU by the end of the first quarter — a number revised down from an original plan to ship at least 100m shots by the end of March.

The company has also said it will need to source 90m second-quarter EU doses from outside the bloc, but has not stated where these would come from. 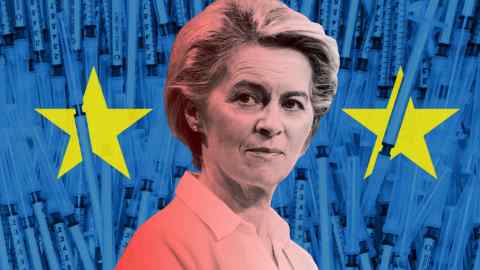 The White House has said it intends vaccine doses made in the US to be used to meet domestic demand first, as per an executive order signed by former president Donald Trump in December.

While Washington does have an order for 300m doses of the AstraZeneca jab, the situation is complicated because it has not yet been authorised by US regulators.

A White House official said: “The president’s first priority is to make vaccines available for every American. The US and EU have committed to deepening co-operation on pandemic response, including by enhancing public health capabilities and information sharing. We know that in order to beat this pandemic and to turn a corner on economic recovery, we must work with our allies and partners.”

The EU also wants to ensure that US rules do not impede shipments of raw materials needed for vaccine manufacture in Europe.

One area of concern is the EU’s dependence on the US for supplies of lipid nanoparticles, which are essential for new mRNA technology vaccines made by companies including BioNTech/Pfizer and Moderna.

A second White House official said: “The US and EU are reliant on each other for key components in the manufacturing process, and co-operation will remain critical.”