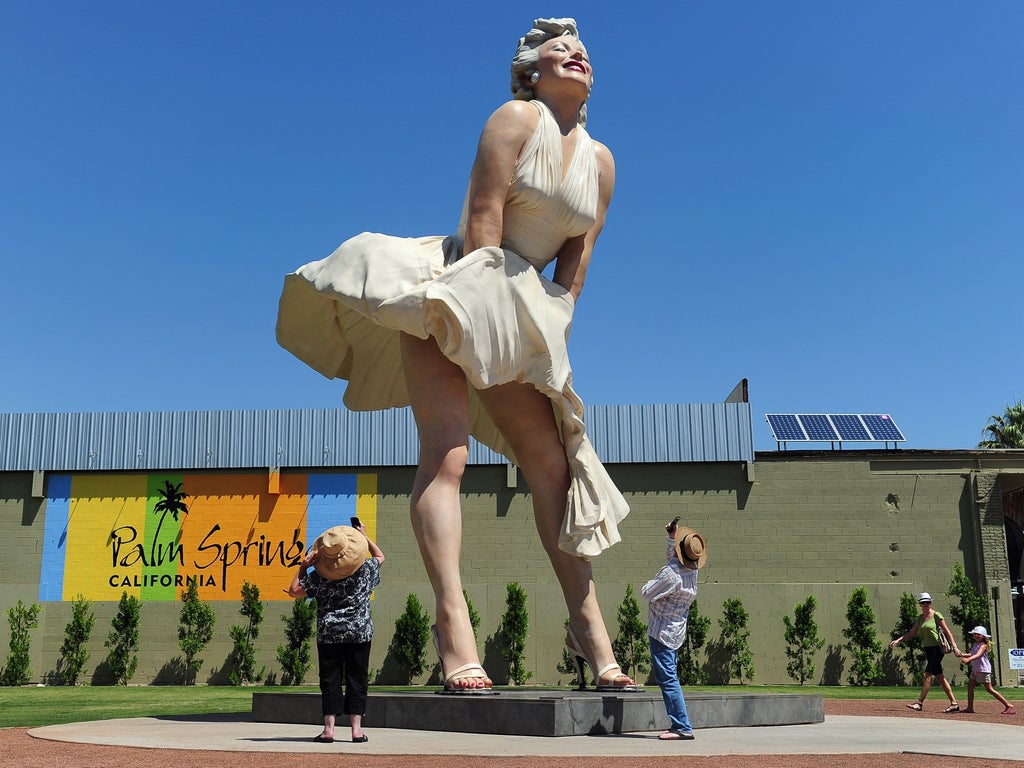 A supersized statue depicting Marilyn Monroe with her white dress flying up has been re-erected in California amid widespread criticism that it is “exploitative”.

Activist groups protested during the 26-foot tall sculpture’s revealing ceremony, which took place on a public site next to the Palm Springs Art Museum on Sunday.

The Forever Marilyn statue was created by artist Seward Johnson in 2011 and exposes the Hollywood star’s bottom and underwear. It toured a number of locations in the US, and was displayed in Palm Springs in 2012 before being moved to Hamilton, New Jersey.

The statue also travelled to be displayed in the Australian city of Bendigo, before returning to the US to be installed in Connecticut in 2018.

In 2019, the mayor of Palm Springs announced its return as a permanent fixture, sparking opposition from locals and the art community in the city.

While the sculpture was voted for unanimously by the city council, the last four directors of the art museum have publicly opposed and condemned its presence in the area, branding it “blatantly sexist”.

The most recent director, Louis Gracho, told The Art Newspaper last year: “You come out of the museum and the first thing you’re going to see is a 26-foot-tall Marilyn Monroe with her entire backside and underwear exposed.

“We serve over 100,000 school-age children that come to our museum every single year. What message does that send to our young people, our visitors and community to present a statue that objectifies women, is sexually charged and disrespectful?”

A joint letter published by a group of former museum directors and curators described the city’s decision as “tone deaf”, adding that the statue “undermines the seriousness of the arts conversations that are part of everyday life for the museum”.

Some campaigners think the statue is inappropriate in the age of the #MeToo movement, which exposed and publicised the ongoing sexual abuse and sexual harassment of women.

A petition started by activist group #MeTooMarilyn garnered more than 41,700 signatures at the time of writing. The group said Monroe, who died in August 1962, “wanted to be taken seriously as an artist and not just a sexual icon” and called on the city not to “defile” her memory.

Monroe, whose real name was Norma Jean Baker, was a victim of rape at the age of 11 and suffered sexual abuse throughout her life. She spoke about the abuse from studio heads in 1950s and warned upcoming female actors to beware of “wolves”.

The statue was bought by a city-funded tourism agency, PS Resorts, earlier this year. The chairman of the agency, Aftab Dada, said the statue’s previous tour in Palm Springs from 2012 to 2014 brought “millions and millions of dollars for the city” and “immensely helped all the businesses in downtown Palm Springs”.

The Independent has contacted the office of the Palm Springs mayor and city council for comment.