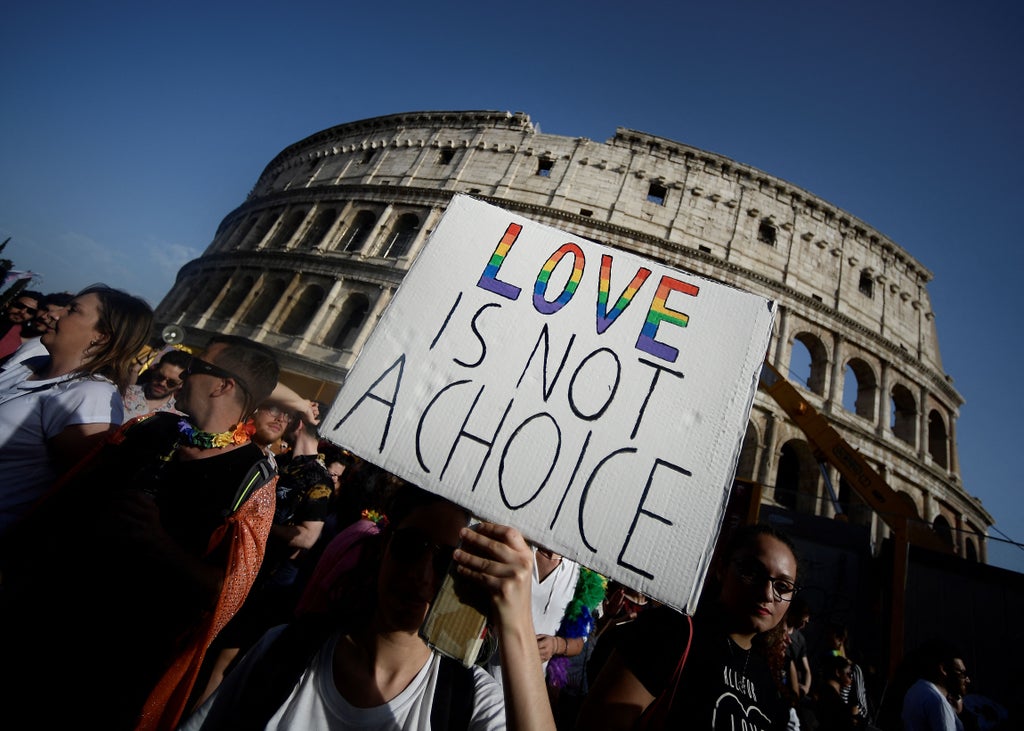 The Vatican has come under fire for interfering in Italian affairs after it raised an objection to a draft law that would criminalise violence and hate speech against LGBT people.

Politicians and activists have condemned the controversial and unprecedented intrusion as an unjustified ‘interference’ into another country’s internal affairs.

Vladimir Luxuria, a transgender activist and former MP, called the Vatican move ‘a dangerous attack on the secularity of the state. We are a democracy not a theocracy’.

The law which was approved in the lower house of parliament in November, but is blocked in the Senate, is opposed by conservative Catholics and the liberal right. Critics say the law named after its champion, MP Alessandro Zan of the centre-left Democratic Party, could require Catholic schools to adopt state-mandated lessons on tolerance and gender theory and those who express Catholic teaching on sexuality and gay marriage could be criminalised.

The Vatican expressed its concerns in a formal diplomatic communication known as a nota verbale, on June 17. The confidential letter claimed the law would violate the terms of the Lateran Pacts, which created the Vatican City State during Italian unification in the 19th century, and protects Catholics’ freedom of expression and organization.

Alessandro Zan defended his bill saying ‘The text does not in any way limit freedom of expression, as well as religious freedom… there can be no foreign interference in the prerogatives of a sovereign Parliament’.

While Pope Francis is the great hope for liberals and has a reputation for tolerance, under his leadership the Catholic church still will not endorse same sex unions. Last year, Pope Francis cited gender theory and its ‘dangerous’ aim of erasing distinctions between men and women, as an example of evil.

The emergence of the letter has reignited grievances about the Vatican’s historically intertwined relationship with Italian politics and fuelled calls for the historic treaty with the Vatican to be abolished.

While the Vatican has often tried to use its soft power or moral suasion to influence Italian policy, this marks the first time the Vatican has called on that provision to object to a draft piece of legislation before it has been adopted.

Leftist politicians and campaigners said it was a cynical attempt to disrupt Italy’s parliamentary processes and called for an end to Italy’s agreement with the Vatican.

Riccardo Magi of the Radical More Europe group said it was ‘an event of unprecedented gravity in the never really clear relationship between Italy and the Vatican’ and called for the abolition of the treaty.

Nicola Fratoianni leader of the Italian Left party called it ‘an extremely serious interference in the independence of our Republic and in the secularism of the state’. The government and Parliament must act decisively, he said.

Franco Grilini president of Gaynet said ‘The Vatican pretext for dictating laws to Italy and interfering with its political work is unacceptable. It is completely out of step with the times, of Europe and the international guidelines on hate crime and discrimination. ‘

But right wing parties who have tried to block the Zan bill, which they view as ‘divisive and ideological’ welcomed the Vatican’s intervention.

Matteo Salvini leader of the League, said the bill was a gag on freedom of expression.  ‘I thank the Vatican for their common sense,’ he wrote on Facebook. Mr Salvini has proposed an alternative which makes homophobia an aggravating factor in violent crime but does not provide any protection for transgender people.

Italy is behind other Western European countries when it comes to discrimination. According to a EU Commission survey in 2019 only 68 percent of Italians said that gay people should have equal rights compared to 98 percent in Sweden and 88 percent in Germany.