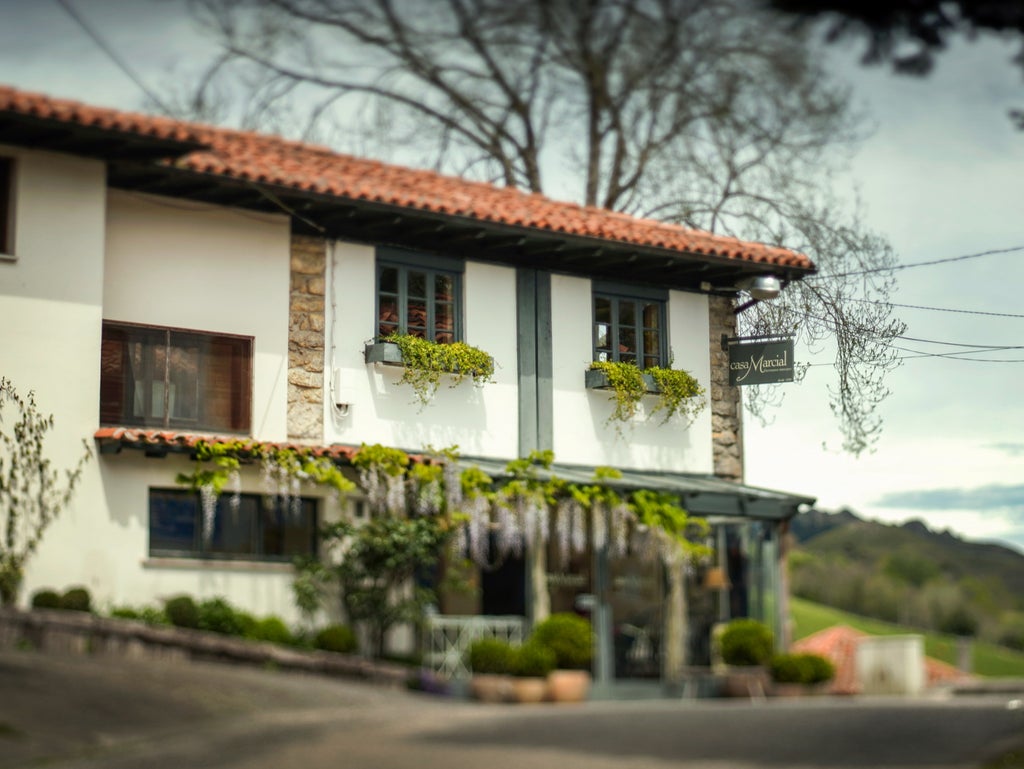 The 2021 World Cheese Awards shone a global gastronomic light on host city Asturias in northwest Spain this month – but there are plenty of must-try gourmet experiences year-round.

The most famed dish from the region, often known as just fabada, this traditional stew of creamy beans, pork and morcilla (black pudding made with sweet Asturian onion) is renowned across Spain; almost as popular as paella. It pairs exceptionally well with local cider (see below).

Where to try it: Any decent restaurant in Asturias will proudly have fabada on the menu; it’s designed as a celebratory dish to impress guests. Outside of the winter season, enjoy it in a rose-garden courtyard in the pretty dusty-pink Casa Morán, a family hotel and restaurant in Benia de Onís, at the foothills of the Picos de Europa mountains. With any luck, you’ll be served by 87-year-old host Señora Rosita Morán. Leave room for rice pudding dessert with a shake of cinnamon followed by an ice-cold sour cherry or apple digestif from Ribadesella-based artisan liqueur company Los Serranos Distillery.

Cider lovers should head straight for Calle Gascona in the elegant Asturian capital of Oviedo. Affectionately known as ‘Cider Boulevard’, it’s a laneway lined with sidrerías (cider houses). Watch as your cider is poured from a great height in the traditional escanciada way. Sip it as soon as you’re served to appreciate the freshness from all that extra oxygen in the pour (no, really). After sampling a few, soak it up with cachopo: slices of veal wrapped around cheese and ham, then breaded and deep-fried.

Where to try it: Anywhere on Calle Gascona, but El Ferroviario has the honour of being the first-ever cider house on the strip, and it also serves ciders from all four cider regions of Asturias (Siero, Nava, Gijón and Villaviciosa).

There are quality dishes available for all budgets in Asturias. The Pitu de Caleya translates as a chicken that is free to roam, and the respect for ethical poultry sourcing is key to the dark, tender, lean meat of this traditional Asturian dish that is cooked low and slow and served with rice rich in its juices.

Where to try it: One of the region’s most respected chefs Nacho Manzano has revived this dish from rural cuisine (typically only eaten in villages to celebrate feasts of patron saints) to new heights, having learnt the recipe from his mother. Once impossible to find on menus in the early 1990s, many popular restaurants in Asturias (as well as around Spain) now feature it. Pay tribute to Nacho’s foresight by trying it at his two-Michelin-starred Casa Marcial in remote La Salgar with views of the Picos de Europa mountains, or in downtown Oviedo, at homely but sophisticated Gloria restaurant.

This rare breed of pig (also known as Gochu Asturcelta) was almost extinct in Asturias, but thanks to a local campaign to protect it in 2002, and careful farming and breeding, the meltingly tender pork is back on menus. “The pig is free to roam around in oak and chestnut forests and the fat is super soft, similar to Ibérico,” says chef Nacho Manzano.

Where to try it: For a truly authentic Asturian experience, befriend a local who is roasting a whole pig for a family event. Failing that, any of Nacho Manzano’s restaurants (see above) may have it on the menu. Meat lovers should also seek out Casa Lobato in Oviedo for generously portioned, hearty beef and lamb dishes, such as Asturian veal with Palomino wine, potato millefeuille and mushroom ragout.

Consume cave-matured Cabrales cheese with vermouth made from cider

A visit to a cheese cave will introduce you to intricacies of imparting the pungent flavour into the Asturian strong blue cheese, known as Cabrales (PDO), comprising 95 per cent raw cow’s milk with sheep and/or goat milk to round out the mix. The Principality of Asturias has the widest variety of cheeses produced in Spain, so it’s also a fine idea to settle at a tapas bar with a local cheese plate to further your education.

Where to try it: Fundacion Cabrales in Arenas de Cabrales has excellent 45-minute English-language tours through a cave outlining the past and present of Cabrales cheese. Cueva del Molín (Tel. +34 985845132) is a family-run dairy that takes Cabrales cheese cave tours and has previously been awarded several times by the World Cheese Awards. La Cabraliega is the perfect tapas bar in Las Arenas to sample a local cheese platter and an icy cold vermouth called Roxmut, made from Asturian apple cider, while inhaling fresh mountain air.

Brittany Ferries operates services from Portsmouth and Plymouth to Santander, which take 24-32 hours. There are regular ASLA buses direct to Oviedo, and Renfe trains direct to Llanes.

Ryanair flies direct to Santander from London Stansted. From there, it’s an hour’s drive/taxi to Llanes or two hours to Ovideo (or you can take the public transport options above). Alternatively Iberia operates flights from London Heathrow to Asturias with a stopover in Madrid.

AC Forum Oviedo Hotel in the Asturian capital has rooms from £62, B&B.

Some of the Top Things Readers Bought in May 2020… – Corporette.com

Israel faces the most dangerous existential threat since its establishment